Why do we buy concert tickets when the same sounds can be heard more cheaply and comfortably within our own homes? Why do popular music concerts include elaborate lighting and staging effects for what is ostensibly an auditory event? Why can’t orchestral musicians wear t-shirts and flip-flops? Clearly, visual information can play a significant role in the experience of music, but how and why does this happen? My talk will explore this issue through the context of a musical illusion in which musicians use visible gestures to change the way music “sounds.” Some expert performers capitalize on the fact that although these gestures have no acoustic consequences, they are crucial in shaping the way in which audiences perceive performances. This illusion raises interesting philosophical questions about what music “is” and how it is best experienced. It has also led to a surprising range of recent discoveries raising new questions about issues ranging from refining our understanding of sensory integration dysfunction in individuals with autism spectrum disorder (ASD) to improving the design of auditory alarms in medical devices – an industry valuated by Industry Canada at $6 billion annually.

Repetition is widely known as one of the building blocks of expert performance.  As the saying goes, practice makes perfect!  To assess the neural implications of practice, Dr. Schutz spent his 2015-16 sabbatical as a Visiting Professor at Ryerson University’s SMART Lab, which led to an ongoing project using EEG to explore use of the Action Observation Network (AON) when processing musical movements.

This collaborative effort will build upon Dr. Russo’s previous work exploring the AON in other contexts, by examining whether it is triggered when trained percussionists watch musical movements they have previously performed repeatedly. If you are a percussionist and would like to participate, please click here for more information. 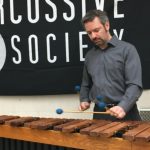 Dr. Schutz gave a brief clinic discussing exercises for developing four mallet facility on the marimba, and then played two guitar transcriptions as part of a montage concert: Recuerdos de la Alhambra by Francisco Tárrega, and Prelude No 2 by Brazilian guitarist and composer Heitor Villa-Lobos.

Nicholas Papador (President of PAS Ontario) hosted this Day of Percussion event, which brought together many members of the Windsor percussion community, as well as percussionists and enthusiasts from around Southern Ontario.